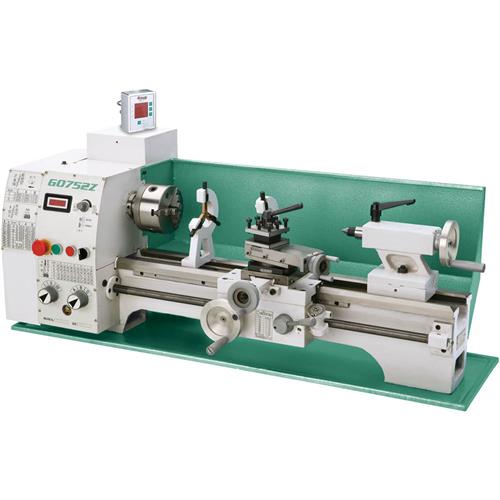 Overview Comparisons Reviews Documents
Documents
Spec Sheet PDF Manual PDF Parts List PDF
Overview
The Model G0752Z is a variable-speed version of our G0602 10" x 22" Bench Lathe. It shares the same features and accessories as the G0602, but is equipped with a digital RPM display on the headstock, and is identical to our G0752 lathe except it sports a 2-axis DRO included. It also has electronic variable-speed spindle control, which allows you to change spindle speeds with the simple turn of a dial—and while the lathe is still running! This feature eliminates the additional time it takes to stop the motor and then change gears or move levers around when changing spindle speeds. Even better, the fine degree of control allows you to set the optimum spindle speed for your feed speed and workpiece material, so that you can get the best finishes possible.

Note: The G9973 Stand is an optional accessory for this machine. Some modification is required, such as drilling holes in the stand, and mounting hardware is not included.
Comparisons

Enjoyable little lathe. I will probably use this more than my larger 16 x 60 engine lathe of 4,000 pounds. A few items I adjusted and/or changed are:
I used my G0752Z to make a screw knob for the bolt that holds the gear/belt drive shield closed, it would be a major discomfort to dig-out an Allen-wrench every-time I needed to change gears or adjust the drive belt. (See pictures) I pressed the knob onto the bolt head with my 50-ton shop press. This will be much handier now.
During this lathe work (drilling), My attention was naturally affixed on the turning (business end) and exceeded the quill travel. The quill traveled past the quill guide screw and everything began to spin in the tail-stock end; in my hand. This ruined the quill and tail-stock lead-screw threads. I was able to salvage the quill but had to get a new tail-stock lead-screw from Grizzly. I cured the safety-hazard by using my G0755 Grizzly end mill to cut the guide grove in the quill deeper to create a definite mechanical stop; I lost a small amount of quill travel but made the unit definitely safer to use. I also replaced the set-screw M6-1 x 12 with a longer and harder bolt for the guide.
The belt in the belt drive seemed way too short (extremely tight). To change from pulley to pulley it was a fight and heavy prying on the belt to locate it to another set of grooves this is not good on the bearings, pulleys or the belt. Contacting Grizzly I was able to get a longer (much better fit) belt. This required the belt tension-er to be used, but simplifies changing the belt location; Belt tension-er needs to ride on the bottom of the belt otherwise the belt rolls-over due to the radius of the back of the belt.
Not understanding why the thread-dial assembly disengages when the self feed in engaged yet but, working on it. The DRO and dials on the crank handles do not coincide and do not coincide with my several sets of digital calipers so I have to measure often for any kind of accuracy for close tolerance fitting.

This little lathe seems to have good power, seems plenty sturdy, I like the 4-sided tool post. I have fashioned a chip restrict-er to keep more chips contained and a hinged chuck-shield. I purchased the Deluxe G9972Z stand along with the G0752Z and glad I did. It is so well built, couldn't pass it up; they just naturally go together in my opinion.
I'm glad I have this lathe now, and plan to dress it out as I have my 16 x 60 lathe. If I have good and enjoyable experiences with this G0752Z in the future as it seems to be going; I may very well purchase another yet smaller lathe.

I would have readily given 5 stars if it weren't for the above mentioned little-items that I have had to work through.

This lathe arrived a few weeks ago, and as a weekend hobbiest I haven't had time to really get everything cleaned up and functional. I purchased this lathe knowing a smaller import mill like this one would likely need some work to really make a useful tool. My feeling is that going through everything in detail is the best way to get to know a new tool like this. This is truly a benchtop lathe, one size up from a mini-lathe but not a full-sized lathe by any means. The DRO and variable speed are "bells and whistles", neat features, but not the core of a lathe. I look on this lathe as a complete kit, sort of the "heathkit" of lathes, a build your own project that has all the features already included in the kit. The only "feature" really missing is that this lathe won't turn left hand thread. I considered that before ordering and opted for this lathe, while a bigger lathe would solve that it wasn't in my budget for a 'beginner' lathe.

The tailstock slides cleaning on the bed, and the ways are clean and smooth. I'm making my own bench so I haven't checked for accuracy yet.

The four way tool post included with this lathe is probably the biggest flaw. It looks like a grade school shop project, or like it was milled using a worn out drill bit. As is, I can't believe it would hold anything solidly without risking a lot of chatter. I had already decided on a quick change tool post, going with one of the better made imports, so this wasn't much of an issue for me, but anyone trying to use the provided tool post would be frustrated.

The compound and cross slide were both fairly stiff. I've dissassembled them completely and am in the process of rebuilding them. They are nicely polished (surface ground) on the outside. It would be more useful if they had surface ground the interior dovetails. Upon dissassembly the cross-slide appears to have sat in a stockpile for a while, long enough to have picked up rust and some pretty bad surface pitting internally from that rust. I had expected to have to polish them a bit, but looks like I will need to resort to milling the contact faces of the dovetails. While not insurmountable, this was not impressive at all. I may follow up with pictures, don't have any in hand at the time Grizzly sent me the email for this review.

The small toolkit that comes with the lathe is useful to have everything needed in one place, but I'll upgrade the wrenches. I already ordered a live center to go with the tailstock (it came with several dead centers but not a live center). It comes with a faceplate as well as the three and four jaw chucks. I'll need to get a dog and a few fittings to turn between centers. The gear set for the threading gears are metal and appear well machined. I haven't opened up the headstock or the saddle yet. My intention is to get the crossslide and compound tuned up and see how well it works from there. Once I get those tight and smooth, I'll test it out and maybe report back on whether the VS is a good option. My thought was that it would be nice to tweak RPM without stopping the machine to get good finishes and/or chip breaking without having to fully stop and restart to do a gear shift. I can't yet report on the tradeoff against full HP/torque of running the motor at a fixed RPM and gearing it.

Works great right out of the crate. Nice bench top lathe. Glad I decided on the VFD Drive, and DRO. Went with Grizzly for the great customer service

Ordered this in Dec. of 2017. Received it in August of 2018. Then had to pay extra for tariff. Not happy about that, but the lathe is excellent. No issues. I would recommend the lathe. Quality appears to be excellent. Good alternative to buying a 40 year old South Bend. Have a basement shop. Size and weight are manageable.

The delivery by the trucking firmssss, was something else, horror story! But, I finally received it, and I do not blame you for that problem at all. Now, the lathe it self. I spent a lot of time cleaning, and setting it up. A few of the small markers and indicators are very inexpensive, or just "plain cheap", but overall I am very pleased with the machine. I have used it and so far and it has checked out to be very accurate. I am glad I changed my order and added the "Z" to it, the DRO is nice. So, for you, "Grizzly", and the machine, I will give you
both an "A". Thank You, John S PS, I am an experienced machinist.