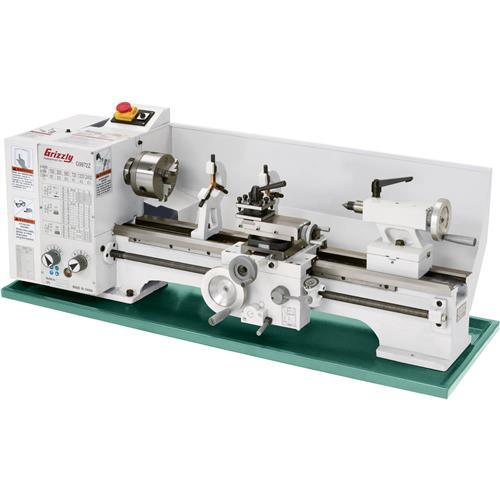 Overview Comparisons Reviews Documents
Documents
Spec Sheet PDF Manual PDF Parts List PDF
Overview
This is another great starter metal lathe with more capacity than typical benchtop lathes! This specially designed machine is an outstanding value and able to take on light duty jobs requiring a 10-1/2" swing, a 25mm spindle bore and 26" between centers. And with a 1 HP motor, you'll be able to make quick work of even the most challenging jobs. This is an awesome value and a lot of lathe for a hobby machinist! Feeds and threads to the left only.

I have owned 2 other floor models that I purchased new , with NO disappointment. Grizzley is the best overall for the money. Yes, i am very happy.

still building the HD bench the machine will sit on. have not opened the crate yet,but soon!

I've been using this for a few months. Had 2 large South Bend lathes at work, no room for that kind of equipment at home. No comparison, the pro stuff is in another league.
The paint is sub-pathetic. Chips off if you look at it. A few places I had to scrape off paint where it didn't belong, a few edges to soften.
Belt/speed changing is dumb. The long belt/lower pulley is a crazy tight fit, and had to fight it to change pulley position. Went to the shorter belt/upper pulley to lower the speed. Even tighter! Worried I'd cook the bearings it was so tight. Ordered USA made belts of the same size designation, and they were longer. Now I can get that slower set of pulleys to work. The idler is now useful to take up slack, and I can change belt speeds. Noticed the pulleys were out of line. Removed the upper/rear one, and saw that a spacer was in the wrong place. All happy now. Wondered why the nut on the idler pulley felt odd. Measured it, and it's 16.5 mm wrench size, but 10x1.5 thread. So, neither a metric nor inch wrench fit. Changed it to another nut I had, and all is good. Had to do the same on my Grizzly mill/drill vise. A lot of their hardware is crap.
Wish it fed left to right. Wish it was variable speed. Would have paid more for those features.
Slowest speed is not that slow.
Spindle thread is an odd duck. Even Grizzly doesn't offer offer chucks or backing plates is this thread. Ordered the Grizzly 5C chuck, and had to order a backing plate from elsewhere and machine off a ton of cast iron for it to fit. Not fun.
I could go on, but the reality is that it's a sub-$2K lathe, not a $20K tool room piece. You get what you pay for. For the money, weight, and size it's OK.
Already making parts and tools. I'll be sorting it out and improving it as time goes on.

this machine works ok after taking apart compound slide and polishing very poor machine work.turned it on and it spit out a bolt that went thru the gears. so far can`t find where it goes must be an extra.am disappointed in belt changing also would be nice with variable speed. other than that i might grow to like it . jim eckart

I have 58 years experience in manufacturing, and this is more than excellent hobby lathe.

I purchased my G9972Z lathe, because I wasted 6 months on trying to hire other machine shops to make the parts for me, So I am setting up my own shop!.
The lathe works very well so far no problems with the operation of the lathe.
But there are a few things I think they could do a better job of...
1. They need to make a way to make changing the V belt easier for changing speeds.
2. The Ball Oilers are for the most part are of poor design, as I had two fail on the first lubing of the lathe.
3. Better prep of the metal before painting... Paint does not stick to metal when there is still oil on the metal...

I bought this lathe a month ago with high hopes it would be as good as all of the reviews and it is. It arrived with some restocking delays but it was worth the wait. It was disappointing when it arrived with the shipping create crushed [clearly mishandled by UPS freight line -- other freight had been stacked on top of it]. After inspection, I was relieved that there was only minor damage. I had notified Grizzly of the damage on receiving the shipment and the customer service was great. All claims where handled quickly and painlessly.
I purchased the mating stand and had preset it before the lathe arrived, which made it possible to only rig and lift the lathe once.
I have added a cooling system and 4' lighting over the top of the machine. I have started running some aluminum parts on it and it has so far exceeded my expectations.

worked as expected. poor paint, flakes off easily. disappointed there was no hight adjustment on tool holder. still a good machine

Bought this to make parts for an engine swap for my old tractor and have been happy so far. It's easy to hit .001" diametrical accuracy and I added a dial indicator / mighty mag for carriage distance. Motor and gears are quiet and I like how the power feed is a different mechanism than the half nut which does threading, so it should last a long time. The main selling point for me was how the power feed minimum is .0022 / rev so you can get a professional finish. Also it's the largest "simple" bench top lathe before they double in price. The one improvement I would suggest would be a lead screw chip guard so the long ribbons don't get would up in it. Other than that, I think it's great for its intended purpose.

Had the very small grizzly lathe but wanted to upgrade. This one is a nice size and appears to thread pretty well. Added a quick change tool post and started making chips.

Grizzly 7792Z lathe
Having worked in motorcycle and bicycle shops for years, a lathe is one of the most necessary tools. This is an outstanding piece of equipment. The manual is easy to understand and the setup was quick. I am making motorcycle/bicycle parts. One of the major deciding points for this lathe was it is the biggest I can get into my shop without re-wiring the garage. The deluxe stand is also a great piece of gear. Heavy and strong. Lots of storage room for fittings and tooling. I should have purchased this years ago. However, I still have a good 15 years or so of fabricating to do and this is the perfect size for me.
Thanks Grizzly

Bought this in Feb of 2015. We have had only one problem, and Grizzly sent out parts right away. The original 4 jaw chuck had a stress crack. The Replacement has held up fine.
We have used it for some serious work. Boring out 316 stainless cylinders at 3 inches ID was the toughest job we gave it so far. We had to tighten the spindle bearings once. That was an easy job. I should have put an hour meter on it. The only limitation it has is it can't do left handed threads and you can't feed it towards the tail-stock except by hand. There are people who have put on a reverse gearing on this type of lathe, but we have never needed to cut left hand threads so far. For what we do it is good. The speed of changing gears and speed on the V-belts has not been a big issue. I think it is nearly impossible to beat this for the price.

So 4 months ago this arrived in my garage and I'm still in love with it! I would definitely recommend this to a first timer such as myself. My pops has been around lathes all his life and he has no complaints.

My previous machine was a Grizzly 516 combo lathe,mill,drill. I removed the milling head and attached it to a milling table I found for it.
I've had it for about 8 years and it's been a workhorse. I'm SO happy I decided to upgrade to the G9972Z! Changing feed-rates, and
Rotation speed is so easy with the gearbox and belt system, it is smooth, quiet, everything feels solid and well made. I'm also thankful for the extra capacity.
5" may not seem like much but when you are end drilling with a Silver and Demming 1" bit you need all the room you can get. Also like the ruler scale
Engraved on the quill, both metric and standard. My G516 didn't have that. Only wish is the switch is a little out of the way on the top at the back. Wish it were at the front.
The compound slide is easy to use and also well made. In addition the feet have a total of six attachment points very solid mount. Overall very happy.

works great wish I had more room for the next size up , but this does the job..